Home / About the Gordon River Greenway

About the Gordon River Greenway

The historic headwaters of the Gordon River originate north of Pine Ridge Road in Naples. The river flows into Naples Bay and from there out Gordon Pass seven miles downstream, where it enters the Gulf of Mexico.

Part of the Greenway building phase included the removal of exotics such as Brazilian pepper, Australian pine, melaleuca and downy rose myrtle because they compete with the native vegetation. And, in the case of Australian pines, the shallow root system cannot withstand hurricane force winds, bringing the trees down and causing extensive damage.

During the creation of the Gordon River Greenway Park, whenever possible, public access infrastructure was built within degraded or marginal habitat. Because development of the parking lots occurred along the outside edges of the Park, where development was already adjacent, large contiguous habitats were preserved.  The parking lots, trails, and boardwalks were built primarily within habitats that were heavily infested with invasive, exotic plants. Some sections of the boardwalk were even re-routed so they would cut through invasive, exotic trees instead of native, wetland forests. 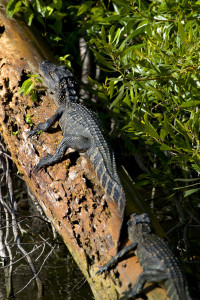 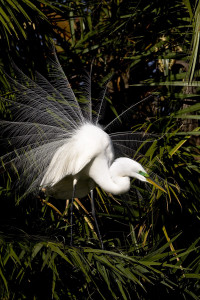 One of the highlights of the Greenway is a yellow crowned night heron rookery on an island in the Gordon River.

Mammals that frequent the Greenway include otter, raccoon, bobcat, fox, and opossum.

Mullet can be seen jumping along the river, which is also inhabited by snook, tarpon, redfish, mangrove snapper, jacks and sheepshead. Exotics such as Mayan cichlid and spotted tilapia are also seen.

Amphibians living along the Greenway include the green treefrog, squirrel treefrog, oak toad (an upland species), and the Cuban treefrog (an exotic).